I came to Bali with the intention of conquering a few fears, namely those of being alone with myself for extended periods of time (thanks to Mara I haven’t had to face that one just yet) and of plunging into the depths of the ocean with nothing but my four tasty limbs and an oxygen tank in tow. Never did it occur to me that my biggest fear factor obstacle might be the gecko that has taken up residence in my cottage. I didn’t even notice the local gecko community here until Mara and I were having coffee yesterday at a cafe and I saw a few of what I now believe were baby geckos scaling the walls inside. No problem – I’ve seen lizards before. In the open public air, surrounded by other humans who would surely rush to save me in case of an emergency gecko situation. Now would probably be a good time to point out that I have a borderline psychotic fear of anything that can be sitting stationary a safe distance away one minute and before you can say “lily pad” can be sitting squarely on your face. This goes for crickets, frogs, birds, snakes, and geckos – all creatures I enjoy from afar or within the confines of a terarium. The first night here I thought a bird had snuck in and was squawking me awake in the middle of the night, but oh no, it turns out it was the rather adult gecko I met up close and personal the following night while taking a shower. One minute I’m sudsing the salt water out of my hair and the next I look up and see him in all his glory glued to the wall of my bathroom. I’ve never moved so fast in my life. He didn’t even flinch because, as my Googling has since assured me, that’s not really gecko style. They pretty much just hang out up high on walls away from people and eat bugs. But that’s not the point of a phobia, now is it? The point is that he could find his way to my bare flesh in a heartbeat if he wanted to. It took me no less than ten minutes to psych myself up enough to go back in there and face him, though I seriously considered letting the shower run all night and rinsing my hair out in the ocean instead. The only thing that stopped me was knowing about all of the even quicker little crabs out on the breaker wall also waiting to scurry onto my face. Seriously, that is the only reason. I finally got my shit together and got out of that bathroom for good. I shut the door and figured I’d keep him locked in there until I could get one of the teenage ashram boys to catch him the next day. I would go to the bathroom outside if necessary. Had I not been so exhausted I probably would have been up all night; instead I slept mostly okay until the squawking started around 3AM very close to my bed. The jerk found his way out and had come to get me. I laid there awake for three more hours hoping the mosquito nets would keep him from coming to lick my eyeballs until I knew the ashram members would be finishing morning prayer. I jumped from my bed to the front door in case he was waiting for me and proceeded to interrupt other people’s devotional commitments to begin my interviews about gecko behavior. Not surprisingly, my fears are completely unjustified. The geckos are just a part of the Balinese ecosystem and I best figure out how to deal. I was offered to change rooms, but then what if there is a whole gecko family living in the next one? At least I know my gecko flies solo and mostly where he hangs out (behind the dresser) when he’s not scoping me in the shower. So here I am, attempting to conquer this admittedly ridiculous fear and besides gathering as much intel as I can on his harmlessness I’ve decided to personalize our relationship by naming him. I asked Mara to give me a good German name – Hansjergen (pronounced “Hans-yurgen”) it is! I’m still sleeping with the lights on. 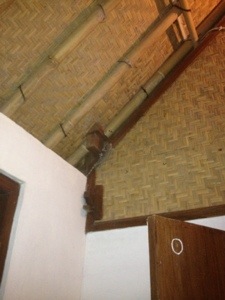 3 thoughts on “name that gecko”